Clogged with garbage and damage 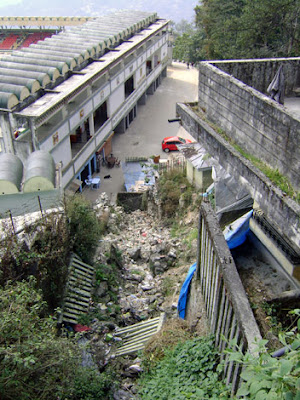 The jhora next to Paljor Stadium, which had broken its banks on 08 June last year and washed away a portion of the children’s park there, de-stabilised the hillside gallery [of the stadium], and eroded the foundation of the chowkidar’s quarters. Some of the concrete debris still remains in the jhora which now looks clogged with garbage and damage. With just a few months for the monsoon to arrive, another repeat of last year’s events appears inevitable if no action taken soon. The CCTVs being mounted at jhoras in the capital to watch against dumping might discourage future transgressions, but what about clogs which have remained uncleared for far too long.
Posted by Sikkim NOW! at 12:19 PM 1 comment:

If this is Development Area, what must under-developed areas look like? 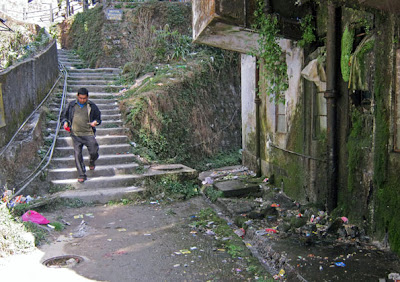 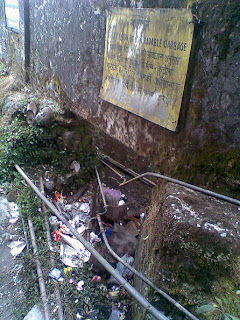 It must take a very dark sense of humour to continue referring to this embarrassment as a part of Gangtok’s Development Area, but in the absence of a civic sensibility, black comedy will have to do. These images are of the stairs running up from Development Area to Zero Point. The flaked paint on the signboard tries to say something about how dumping “here” was a punishable offence.
This photo has been shared by a reader who moved to Development Area recently and understandably does not wished to be named.

If you have some photographs of forgotten waste management in Gangtok, mail them to us at newsforsikkim.gmail.com and we will post them here to share, wonder and sympathise with..

Email ThisBlogThis!Share to TwitterShare to FacebookShare to Pinterest
Labels: Garbage 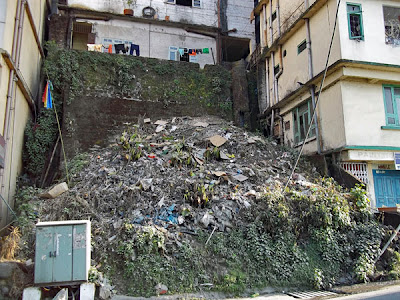 Any visitor to Gangtok is impressed by how the capital town of Sikkim is remarkably cleaner than most other towns and cities of the country. This, however, is a reputation which is on the brink of getting demolished if some earnest efforts are not undertaken to manage the capital’s waste better. A dated data, the only one at hand at present, informs that 26,000 kgs of waste is collected from Gangtok every day. The rest is ferreted away in street corners and neighbourhood jhoras. And the problem is no longer limited to Gangtok or the other urban locations in Sikkim, it’s as vexed, if not more, in the rural areas.
We start with Gangtok for now.
Posted above is an empty plot with a reckless layer of litter. There are parts of Gangtok which are much worse off, but this is showcased here for the launch of the Urban Woes section of this blog to highlight some points:
- It is right next to the national highway at a spot where vehicles are slowing down to negotiate the hairpin bend at “Biralu Dwar” short of Deorali. Thankfully, most passersby are awed by the “Station” Gurudwara opposite to notice this filth. But isn’t the fact that this is opposite a place of worship also worrying?
- This spot is metres short of two offices one would otherwise believe to be concerned about waste management. A short distance down the road is the office of the Sikkim Pollution Control Board and a flight of stairs beyond is the office of the now around for sometime Gangtok Municipality Corporation. They pass this litter every day, and still it remains. Says a lot about where the priorities lie.

For the week ahead [04 Feb to 11 Feb 2011], we will serialise other locations passed over by any attempt as waste management. Readers can join this initiative by sharing photos they have taken of such embarrassments and leaving behind comments to build some pressure on the concerned authorities and the civil society to pull Gangtok out of the mountain of waste it is littering around itself. Some suggestions on how this can be done will also be welcome.
Send your contributions to: newsforsikkim@gmail.com